I just watched Deadpool last night and I think the movie has nailed the character 100%. It inspired me to write this post as I see Deadpool being developed into a serious franchise in the years to come. I have mentioned before that the effect of movie hype on comic prices will be reduced. However, that does not apply to popular characters like these 2 who have real fans and supporters buying their comics.

Note: you can check out my previous Deadpool key issues. To my surprise, the Hit Monkey #1 really became a $15 book lol.

With what I have seen, I believe Deadpool can become the anchor for the next phase for the X Universe, similar to how Wolverine did it in the past. The only difference is that Deadpool will open up more types of movie genres beyond just the superhero type, which is what the Wolverine and past X Men movies have been about. This direction will be invigorating to the movie crowd who might get bored with tradition comic book movies. For example, I see this Deadpool movie as a comedy, that is done in a superhero world. It is a great direction that no CSM has tried before.

With Deadpool as the center, then it is easy to see which books will get hot. Basically, it will be anything that has Deadpool in it. Everything else is not going to matter as much. That will be the key to my Deadpool comic investing strategy.

Now, let’s talk the elephant in the room first. This, once big key, has seen some strong interest in these few days. Fortunately, I have bought mine when I talk about Cable key issues in 2014.  The question now is how much will this book go? To help us, I have compared 3 books below to show what is possible.

BA #12 is there to set the absolute ceiling. Both NM #98 and # 87 has no chance to reach this level due to the supply difference as can seen from the Census information. This will give you some realistic expectation in case there are some who wonders if NM #98 can be a 2k book.

Now, the true comparison is between #98 and #87. Popularity wise, Deadpool wins hands down. The tricky situation then is to access how the lower supply of New Mutants #87 can offset this popularity gap. I don’t have the exact formula down but you can play with assumptions and see how much growth is left in #87 relative to #98’s prices.

At current pricing with no promotional movie materials or trailers, #87 is already half the value of #98, which means the demand is there. Once the hype train starts, it is not difficult to imagine it getting a 20-40% increase, which means a price range of $480 to $560. This is a conservative estimation but shows you can still make money if you buy now.

This was recommended by Gary K and I thank him for it. With Cable being confirmed in the sequel, fans will be looking for this book due to it being the first Cable and Deadpool series. If Cable headlines the movie like how Wasp did it in “Antman and Wasp”, then there will be a major take up. Print run for this book is around 40k so it doesn’t have those huge copper age runs. Currently prices are around USD30 but I predict it can easily be a USD60 book, depending on how successfully they translate Cable onto the screen.

There will also probably be an X force movie starring Deadpool. If this comes to pass, the book to get is Uncanny X Force #1, instead of New Mutants #100 because this  version of the team has Deadpool in it.

You can see parallels between this and the New 52 Suicide Squad #1. The SS #1 is now more pricey than Legends #3 even though the latter is suppose to be the first appearance of the modern team. Reason: no Harley. That will also happen with Deadpool. Uncanny XForce #1 will be more valuable because it is the version of the team with Deadpool in it. Prior versions of the team without him will be less desirable.

Unfortunately, Uncanny X force #1 is a tricky beast to invest because there are 6 covers with a blank as well as a 2nd print. Among these, which one will the cream of the cream? My choice is one of the following:

Based on current sales, this is the most pricey of the bunch. It seems to be a 1:50 variant and is drawn by Rob Liefeld. Say what you may have the man’s art but he has fans and they are willing to pay $150 for this book. It may seem high but if the x force movie comes to pass, $150 is still affordable especially when you bench mark against other modern variants that have no significance at all. 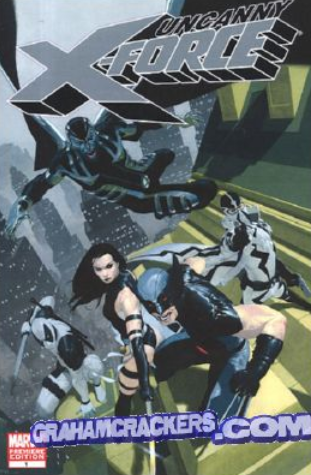 This looks like the regular cover except for the silver logo. It is a retailer incentive so I think the numbers are pretty low as well. Fan seems to love such variants, maybe due to the Valiant influence as the 90s saw the gold logos becoming quite the collectible. It is currently available for around USD50-60 so it is still within affordable range. 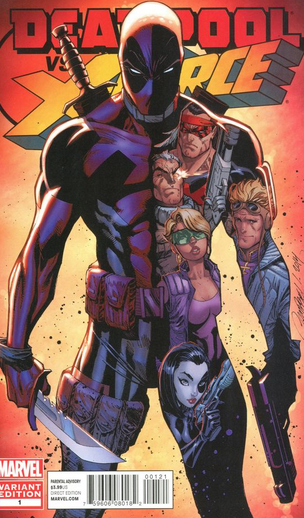 Call it the Campbell effect but many of his covers, especially those with low print numbers are reaching mind blowing prices. They make buying NM#98 seems like a piece of cake LOL. Don’t believe me? Check the prices on issues like the ASM 678 Venom variant or the Wolverine #1 Deadpool variant.

This book is currently on that path. Prices in recent weeks have literally almost double and I see no slowing down. That being said, I must warn everyone that variant investing is like rolling a dice. You never know which ones will hold the value and which ones will be money down the toilet.

In terms of print numbers, the regular version has sold about 54k and this variant is a 1:25.

Full disclosure: I have copies of this book as I liked the cover but even then, I am hesistant to say this will be few hundred dollars in the years to come.

4 thoughts on “Deadpool and cable key issues for 2016”

This week saw a 30% jump in the number of units being sold. In total, 136 newsstand comics published after 1997 were sold. I believe a big reason was the Marvel investor day presentation, which lead to new speculation as well as renewed heat on known keys. Star Wars comics sold especially well this week. […]

The first week of December manages to maintain the sales volume of previous week with a total of 104 units being sold (last week was 106 units). The purchase were spread pretty nicely over the different price categories instead of lumping under the cheap buys. This is a always an encouraging sign for the growing […]