Most comic fans have a love/hate relationship with Booster Gold. Those who read the Justice League International will love the humor he brings to the stories while those who have never read him will see him as uncool. Under such different likes/dislikes, it is interesting to see how that affects the value of Booster Gold #1 after the movie announcement that took place earlier in the week.

On average, the jump in prices is in line with more established keys from this age such as Tales of Teen Titans #44 and DC Comic Presents #26. In this regard, it is a good sign that Booster Gold #1 might have some staying power. I have found that there is a positive correlation between after announcement performance and subsequent increase in prices. So far, it looks Booster Gold #1 is on track to perform well in the coming weeks, provided there is no negative news on the movie. 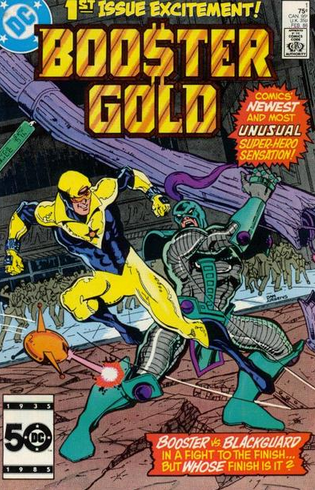 The more interesting question to ask is how far this book can go. In this instance, there are 2 very suitable benchmarks to use. One is Tales of Teen Titans #44, featuring the introduction of Dick as Nightwing while the other is DC Comics Presents #26, the first appearance of Cyborg, Starfire and Raven.

I choose these 2 books because they belong to the same era and also have similar tier characters. Nightwing, is of course, more popular than Cyborg and Booster Gold but TTT #44 is not a real first appearance so that will reduce the ‘keyness’ of this book to be on par with a more official first appearance.

Comparing the value and supply of the 3 books revealed some interesting patterns.

First, there is a strong correlation between absolute print run numbers and number of high grade copies. This is common sense as the larger the print run, the higher the probability of high grade copies being stored and kept away.  Due to this, it is easy to understand why the census number of Booster Gold #1 is so low. In fact, this will be a key factor that will sustain its price going forward.

Some might argue that the low census number is due to a lack of incentive to stab. While that might be true to some extend, bear in mind that this is not the first time Booster Gold has been rumored to appear in a media channel. When those earlier rumors surfaced as far as 2011, prices of this book started to climb upwards, thus creating incentives for Booster Gold #1 to be stabbed. Despite this, we have not seen a avalanche of 9.8 or 9.6 Booster Gold #1 like we have for TTT #44 and DC Comics Presents #26. I am not saying the census number will not increase for Booster Gold #1. It definitely will but I am predicting we will not see a huge jump in this number, relative to the other 2 books.

Given the lessor supply numbers, we should expect prices of Booster Gold #1 to exceed TTT #44 or DCP #26, since their ‘keyness’ is about the same. Indeed, that is the case with TTT #44 as the large supply has finally weighed down its price from a high of USD350+ in 2014 to its current level. However, DCP #26 still commands a significant price premium over Booster Gold #1 and that is something worth a closer examination.

One big factor contributing to the rise of DCP #26 is the Cyborg movie that has been slated for 2020. This news came in 2014 and the book has since risen steadily to this current level. Booster Gold #1 doesn’t have such a runway as its earlier news were mostly rumors or has a high degree of uncertainty around it, IMHO. The recent news, however, seems more definite and I think that will play an important part in giving Booster Gold #1 the runway it needs to start gaining in price.

Remember that Booster Gold #1 had a much tighter supply so if this book had a solid runway to begin its ascend, we could see a much higher price tag at the end of the year.

I remembered buying both books at around the same prices of around USD20+ back in 2013 so I know it is not because DCP #26 has been historically significant. If so, their prices wouldn’t be around the same level.

The current pricing for DCP #26 reflects a compounded speculative interest that has been building since end 2014. If the same compounding took place for Booster Gold #1, I believe the pricing effects will be stronger.

In this article, I covered bronze age comics that got hot once and are now very cold. This might not be a bad thing as they represent buying opportunities for those who believed in the long term potential of these characters. For these comics, I am focusing on VF and below as the high grades […]

While it might not be obvious, comic reprints, especially from Marvel, are worth money. On average, they can be worth anything from 5-20% of what the original comics are selling. This article attempts to quantify the value of Marvel comic reprints to seek out investment opportunities. 2nd prints are reprints The modern market have seen […]