Time to see how much my amazon niche sites have earned over the past month. December has always been a great month for Amazon due to the frenetic Christmas shopping that Amercians do. When they go shopping crazy, my earnings go higher. Loved it!

Onward to the screenshots! 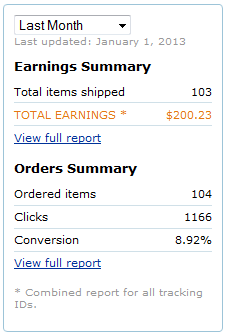 So, Dec’s amazon earnings is about 70% higher than Nov. I expect the number to go down for Jan as people goes back to their normal spending habit. However, in 2013, I have bigger goals for Amazon which I will announced in my future posts.

Why am I disclosing my amazon earnings

A few close friends asked why am I disclosing my amazon earnings in public? My answer to them: to show that this is real. To me, the Internet is a giant sewage that has pipes filled with money. If you can build a small connection to these pipes, some of that money will flow right into your pocket. This disclosure is to show readers that what I am saying is real and there is money to be made online if you put some effort into it.

To be honest, I have been totally lazy in 2012 when it comes to my Amazon sites. Most of these sites are built with only a couple of articles each. I am surprised to see the amount of money they made with such minimal effort. This is one of the reason why I think I can do much better in 2013 when I will put in a more concerted effort to growing this income.

Is Amazon my only source of online earnings?

I have more than amazon earnings going into my back account every month but I am not comfortable in disclosing everything. That will draw the inevitable critiques who will argue that USD200+ per month is not a real income and hence I should not be encouraging readers to make money online.

To assure folks that I have more than amazon earnings, I will just going to break my rule once and show a screenshot from another earning source. This time, it is an ad network called media.net, which has formed a partnership with yahoo/bing ad network. 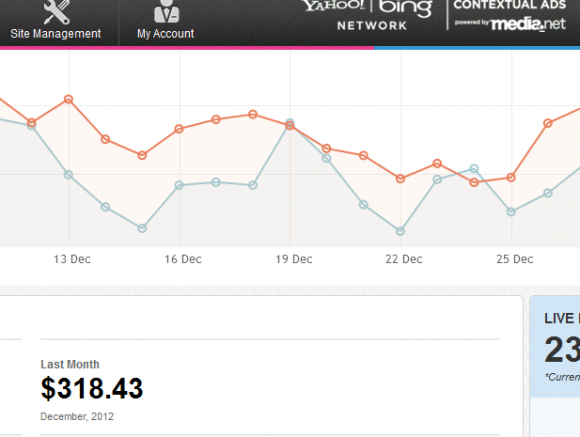 I made USD318 in Dec using media.net. It is a low figure since ad networks don’t perform well for my sites during the shopping period. Nevertheless, even using this as the average, my disclosed earnings is USD318 (media.net) + USD330 (amazon) = Almost USD650 = SGD 780. This number is much high than Dividend Warrior’s monthly dividends and is one of the main reason why I think niche sites are better investments than dividends.My total cost in creating these sites must have been less than USD800, excluding my time which I spent very little of.

I hope showing you these income screenshots will illuminate that option B of my early retirement plan is working. Even without a job, as long as I have these online earnings coming in every month, I will be just fine.

May flew past in the blink of an eye, literally. The good thing is I was so productive that a lot of work was generated during this month. Here is a summary of my public income statement for May. (Note: I did not include income from any of my authority or purchased sites as this […]

This month, I am determined not to be late so here is the April income report.  Lots of things to report this month so get ready for a longer read. In general April has been productive in terms of work produced as well as income earned. The only bad news is I have decided to […]