It is no secret that I am a big fan of the current Ms Marvel, Kamala Khan. The only regret I have was not getting the Ms Marvel Vol 3, #2 Molina variant. I loved the cover but thought the $50 price tag was a bit high when I was researching its prices last year. I just checked it again last night and was shocked to see it is now a $300 to $400 book. There goes my chance of buying it 🙁

Anyway, in order not to repeat the mistake, I decided to take a comprehensive look at all the Kamala Khan incentive variants and see which one I would like to buy. If you are a fan of KK and likes to collect her books that are less common, this list is for you.

Note: THIS IS NOT A SPECULATION LIST. If the book goes up because enough fans want it, then it is a bonus. DO NOT BUY ANY OF THIS THINKING IT WILL BE THE NEXT MOLINA VARIANT!

What is not included

Since this is really a list I created for myself, I don’t want to include anything that goes beyond $20. It is for PC and not for spec so I don’t tend to overspend unless I really really love it. Hence, below are the books that will not be included:

In addition, I am not including variants that don’t feature Kamala Khan on the cover or is not the main figure. One example of the former is the 1:25 incentive cover for Ms Marvel Vol 4 #2. That is a Carol cover so I am leaving it out. An example of the latter is the All New All Different Avengers #1, 1:200 cover where Kamala is not the main character.

Also, only incentive based covers are featured. There are numerous variants that are not incentive based such as women of marvel, stores variants etc al that I am leaving out. They are more readily available so it makes the chase rather easy, which reduces the fun.

Finally, covers that look too ugly to be featured are left out as well.  (the cosplay one for example)

Now, let’s get to the list
Note that I will not be using incentive ratio to estimate print runs. After learning from the CGC boards, this is not a good way to know how many copies are printed, especially when the number turns out to be really small. This is because a small error in estimation can lead to very wrong conclusion i.e a book that is estimated to have 400 copies might have 600, which is 50% more than estimated! 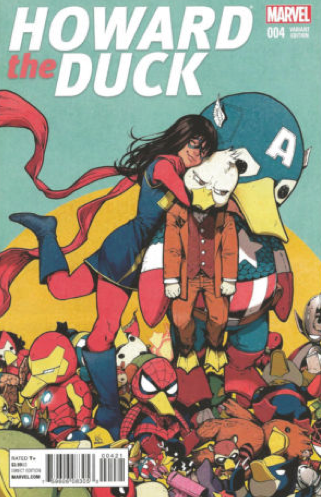 This is one of my personal favourite on this list and is also the hardest for me to locate. It is probably because Howard the Duck #4 has the lowest sales volume among all the books here, thus making its incentive that much harder to find.

I like the way the artist capture the perfect feel for Kamala Khan, the same way Molina captured the bubble chewing aspect. This is definite on my list to hoard covers! 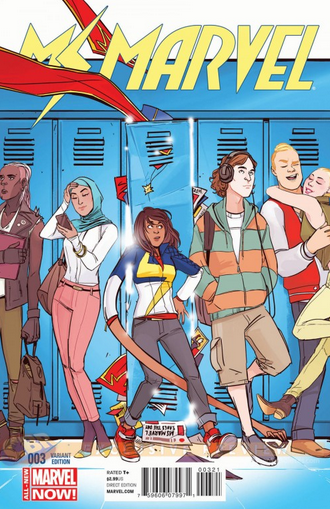 With a sales volume of around 37k, #3 has lower sales volume than #2’s so this issue should have less print run than Molina’s variant. (FYI, relative comparison of print run is fine but coming up with absolute numbers take too much guess work to be useful.) However, one look at the cover and you will know it can’t surplase the Molina variant. Supply is one thing but demand is just as important. I am sure nobody will be rushing out to grab this because it looks gorgeous. 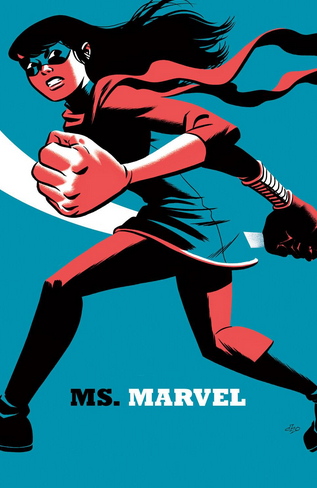 First of all, I want to thank to Mr Gray of the F.A.C.T.S community, who inspired this whole article with his comment about this book. His hypothesis is that if KK was to one day receive the media treatment and breaks out, there will be some variants of hers that will become what X-23’s variants have achieved. I am not a hard core variant guy so I will leave the speculation aside. However, his comment inspire me to look for all KK variants early in case his hypothesis came true so that I don’t have to pay through my noise.

Personally, I am on the fence with this art style. Not sure I love it but I am definitely not hating it either. However, I had the hardest time buying this so I am definitely keeping one just in case someone spikes all the Michael Cho variants. 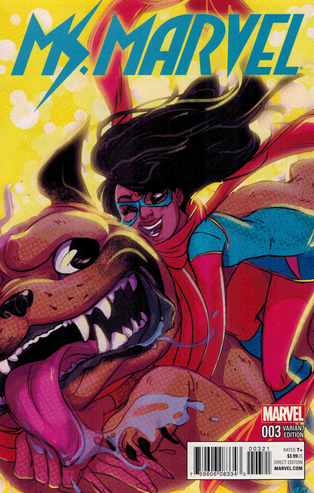 I am a fan of Babs Tarr since I am reading Batgirl as well. I like this cover not because only because of the art but I liked the combination of Lockjaw and KK as well. Sales wise, this has similar volume to the Michael Cho variant. As such, I am definitely buying this ‘for keeps’.

Fans are split between Humberto Ramos. Some love the manga style while others hated it. I am leading towards the hate side although it is not as drastic. In terms of print run, SHIELD was not a hot selling title so it imagine any incentive ratio will be lower than most. With a much reduced sales relative to #1, it can be safely assumed that the #2 variant will have less copies than #1. However, the art doesn’t appeal at all. It is not one of those cover that will be classic for sure. If I am a betting man, I will think #1 below below will have more legs than #2, despite the lower print run. 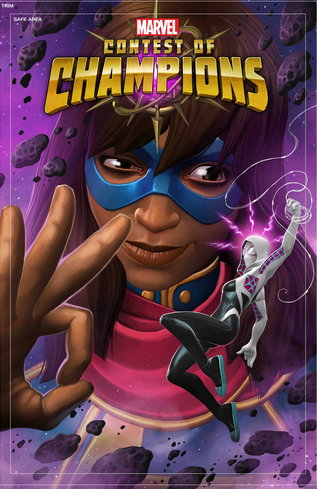 This book sorts of slips under everyone’s radar but features a prominent KK cover along with the popular Spider Gwen. This book has the lowest sales volume of all the issues covered so I am not sure if it might have the lowest print run. Again, not going to comment on this since nobody knows the print run except the publishers. 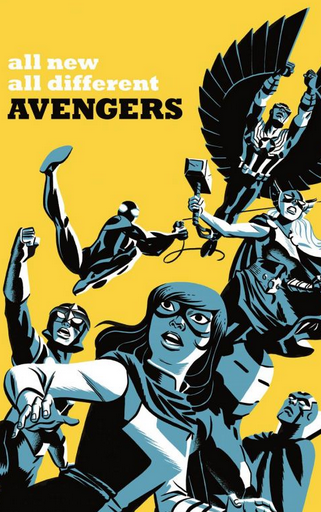 If you love the Michael Cho, the good news is that there is another variant that features Kamala Khan and that is in this book. The sales of this issue is definitely higher than Ms Marvel #4 so relatively speaking, the print run of this variant will be more than the other issue. I had a hard time deciding if I should include this cover as KK is clearly not alone. However, seeing that she seems to be the center of the action, I included on the most margin basis. 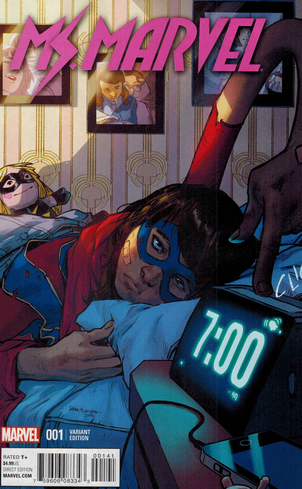 I am surprised this cover is so affordable given how cute Kamala Khan is on the cover. I think it is because nobody hyped this since it is not her first #1, which is a good thing IMHO. Fans can collect this in peace without worrying about bursting a hole in their wallet. 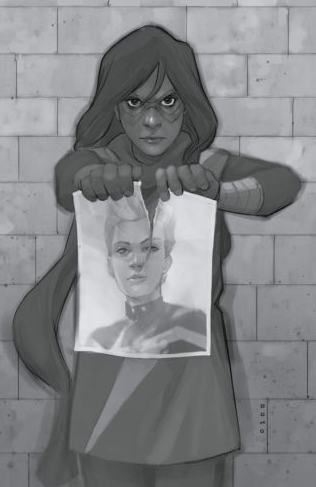 Unlike the other variants, this is a retailer version which doesn’t work in the same way as a incentive variant. From what I understand, this is mostly exclusive to an X number per store. How the actual distribution works in not known to me since I am not a retailer. Given that there are a couple of hundred retails stores in US, I am assuming the print run will be between hundreds to a couple of thousands.

Art wise, I have seldom see Kamala Khan looking so angry so it makes for something different in my PC.

Looking through the covers, it is actually understandable why most are not hot. Compared to the X-23 variants, Kamala Khan isn’t as cool looking as her. One reason is probably KK’s natural appeal doesn’t come from looking cool but being adorable and naive.

From the list, I would chase down the Shirahama, Michael Cho, Phil Noto, Babs Tarr and Sara Pichelli variants. How about you? Which cover is your favorite if you are a Kamala Khan fan?

The last week of Septeber saw a total of 111 newsstand copies being sold. This marks the lowest units being sold this month, as the previous low was 116 copies in the 2nd week of September. 51.8% of newsstand comics sold are sold at $10 and below prices. These include the usual hot selling titles […]

This is the 2nd report on the most valuable newsstand comics from the Copper age. The first sales report can be found here. Overall, the average price of these 9.8s copper age newsstand have went up. The most expensive book in the first report was New Mutants 9.8. In this second report, I am happy […]